HomeBlogs14 Alluring Arctic Birds you must see once in your life

Arctic region is a difficult place to survive for life due to harsh environmental conditions; however, these conditions make an ideal home for some of the most exotic wildlife. Along with the animals like polar bears, arctic foxes, and blue whales, there are numerous arctic birds that inhabit this region. While many birds migrate to different parts of the world to protect themselves from the chilling weather some birds have made it their permanent home.

Bird watching is a true treat for nature lovers and those who wish to explore the wonders of the Arctic region & its living creatures. And if you’re visiting the Arctic region you shouldn’t miss the unique experience watching these exotic & beautiful birds.

1. Puffin
Puffins are birds with a splendidly colored beak during the breeding season, also known as "clowns of the air". These birds shed their colorful outer parts of the beak after the breeding season, leaving a smaller and duller beak. The name puffin stands for “fatling” for their chubby cheeks. Moreover, they are also called as “little brothers of the north” for black and white complexion on their body. 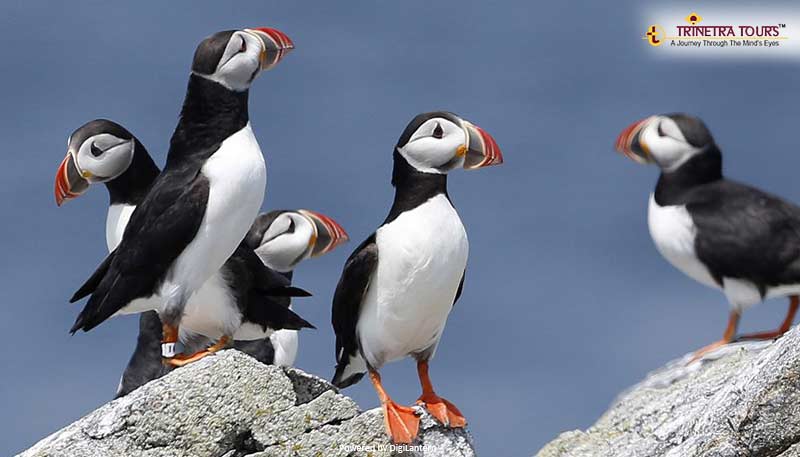 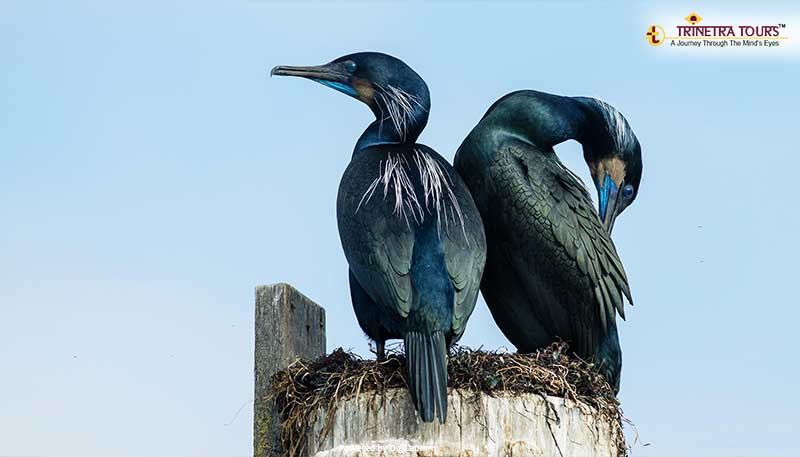 3. Arctic Tern
Arctic tern has the longest migrations in the animal kingdom. They fly as well as glide through the air. In addition, these are long-lived birds with many reaching fifteen to thirty years of age. They are known as sea swallow describing their spindling shape as pounce over the water. It nests once every one to three years. 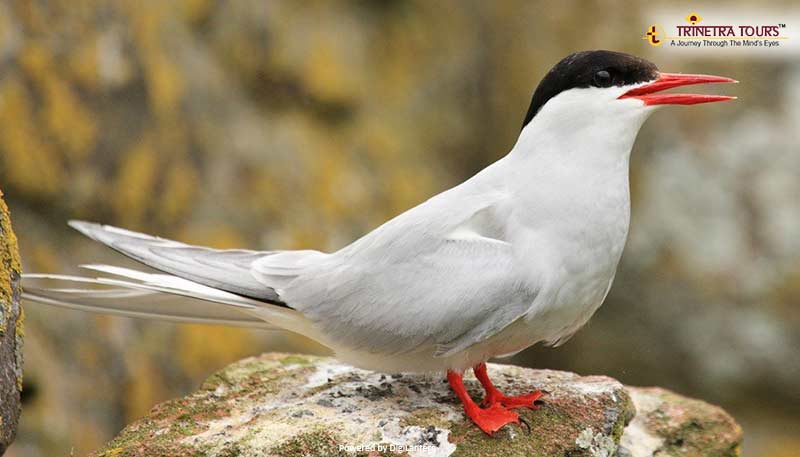 4. White-Tailed Eagle
White-Tailed Eagle in the Arctic region is the most peculiar. They breed in Northern Asia and Northern Europe and are known as Eurasian sea eagle. They are in-fact fourth largest and are also heaviest of the eagles in the world. 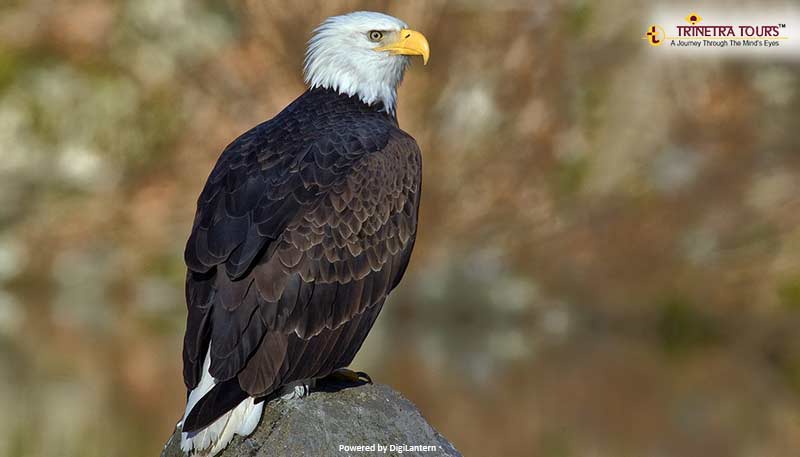 5. Fulmar
Fulmar lives entirely at the sea apart from their breeding months. Fulmar stores a kind of oil in their stomach. They can utilize it as an energy source for long flights or feed their young ones. Therefore their name Fulmar as ‘Ful’ meaning foul and ‘Mar’ meaning ‘gull’. Hence it refers to ghastly smelling stomach oil. 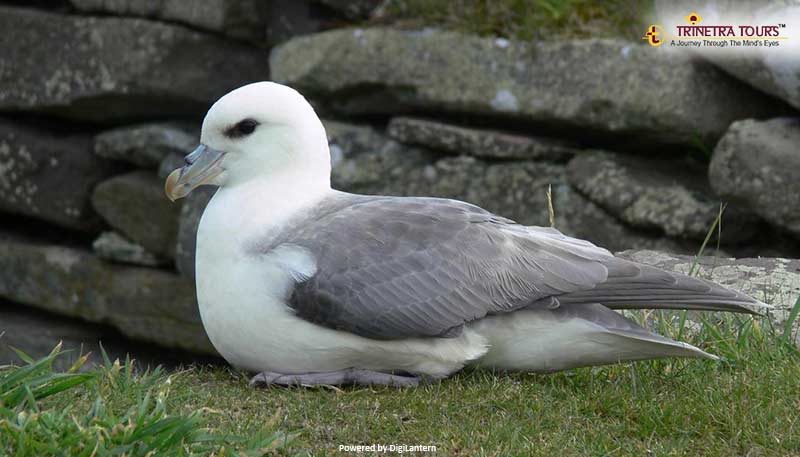 6. Snow Bunting
Snow bunting is nicknamed as “snowflakes”. They migrate in flocks and can fly at high speeds. These birds represent coming of winters for the people living in the southern migration zone. 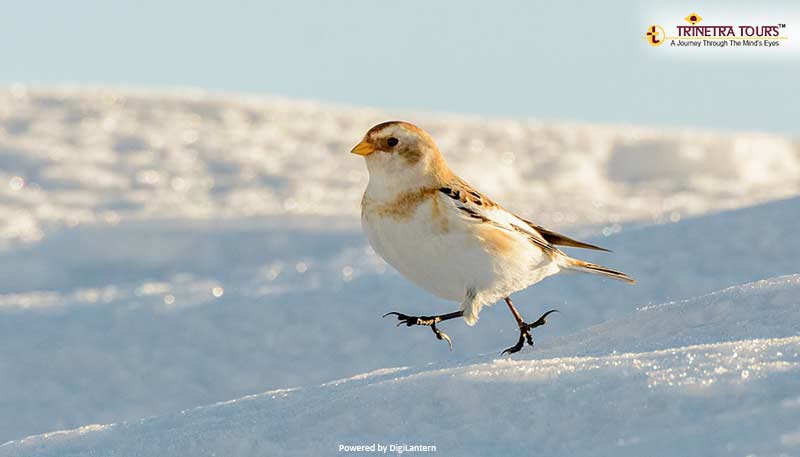 7. King Eider
King Eider genus name is Somanteria which stands for ‘Soma’ meaning body and ‘erion’ meaning wool. These birds have a large worldwide range. Moreover, they are the largest sea ducks in the northern hemisphere. 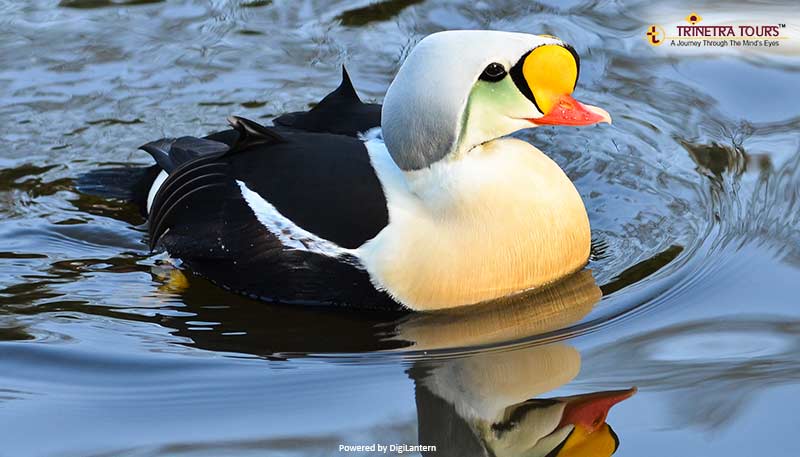 8. Northern Gannet
Northern Gannet is the largest member of the Gannet family. By using their heads and beaks they spread oil across their feathers. With the help of tiny airbags under their skin, they return to the surface after a dive. Northern Gannet migrates faraway to Ecuador. 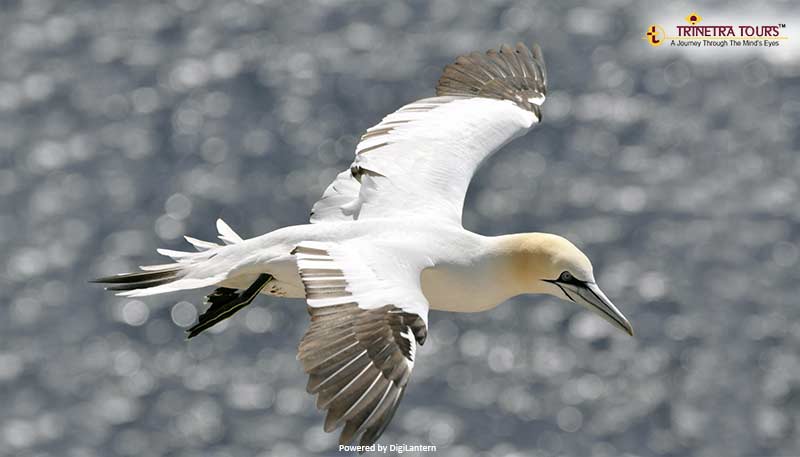 9. Black Guillemot
Black Guillemot is very particular about how they hold fish in their beaks. These birds can change their colors to match their environments. Black Guillemots are also found in deeper waters tend to be non-breeding. 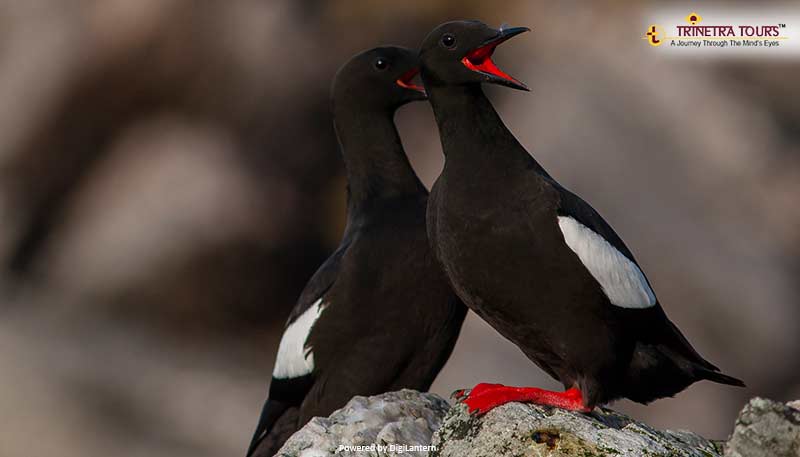 10. Little Auk
The growth of little auk chicks is faster than any other species of Auk and is the overpopulated form of a bird in Svalbard. These birds have a specialized pouch in its throat which it uses to carry food to nestlings. 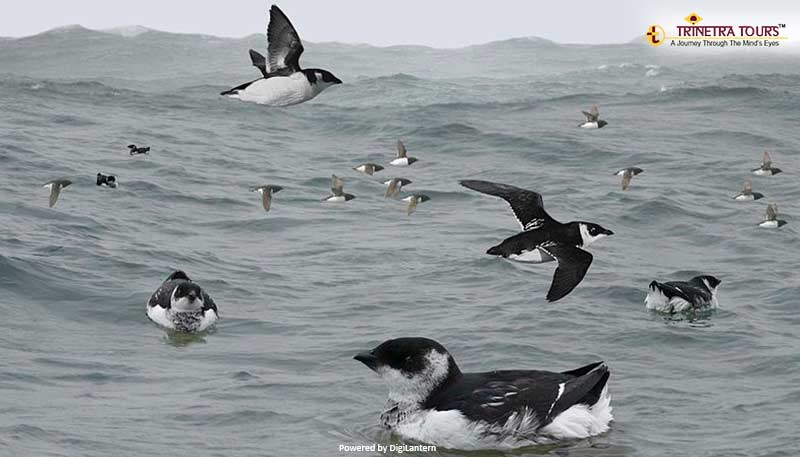 11. Ivory Gull
These are medium-sized gulls which are pure white in color with black eyes, legs, and feet. These lovely birds are however facing a serious threat to their population. Researchers indicate that 85% of their population is lost since the 1980s. Their eggs claim to contain the highest percentage of DDT and PCB of any other bird on earth. These birds are producers of pellets, around massive substance made out of food they eat. 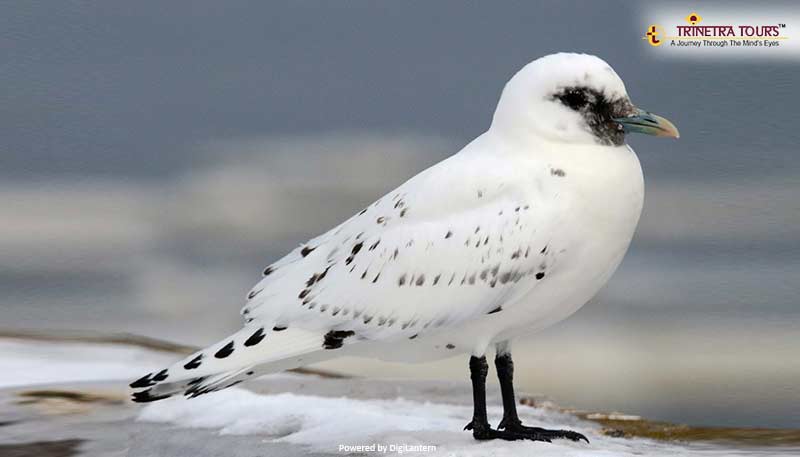 12. Ptarmigan
Ptarmigans are also known as Thunderbirds, hare feet and sometimes croakers or even snow chicken.  They only move to edgy forests in extreme cold conditions and rest of the time they are found sticking to their breeding grounds only. Ptarmigan also changes its colors according to the season. It is seen with a color which is a mix of Grey, brown and black during summer and it changes its color to white with the onset of winter. 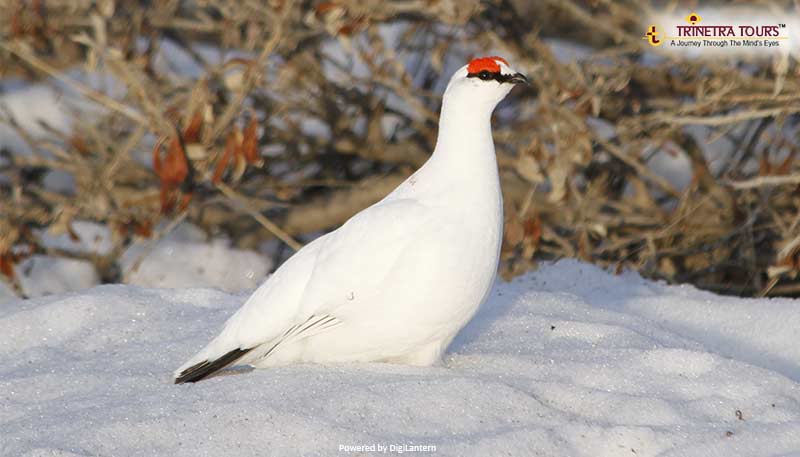 13.  Great Northern Diver
They are one of the most primitive types of birds found on earth. They have a relatively bigger head and heavier bill. Their bones are solid rather than being hollow like other birds. This helps in giving them extra weight-age while taking a dive into the water. 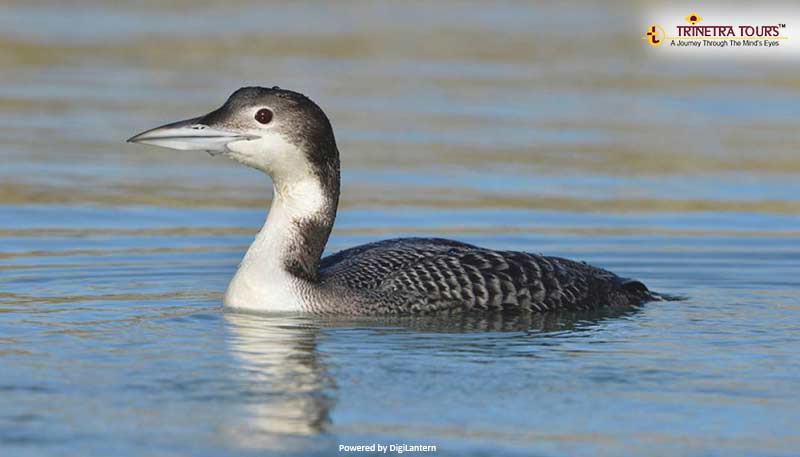 14. Long-tailed Skua
They are smallest of the Skua family. They have slim wings which are adorned with long and delicate tail streamers. They look extremely captivating with dark cap-like structures on head and dark bills. These are known to be very aggressive birds for they snatch their food from other birds by harassing them and sometimes even catch rodents as their prey. 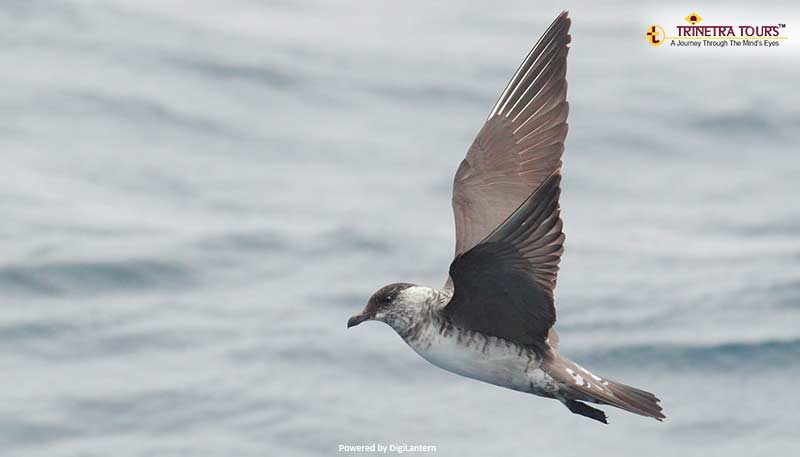 Are you feeling that inner crave to scan the lives and allure of these avians? Write to tours@trinetratoursindia.com to inquire about the best bird watching tours around the globe. And, believe us; we will make that a soul quenching experience for you.